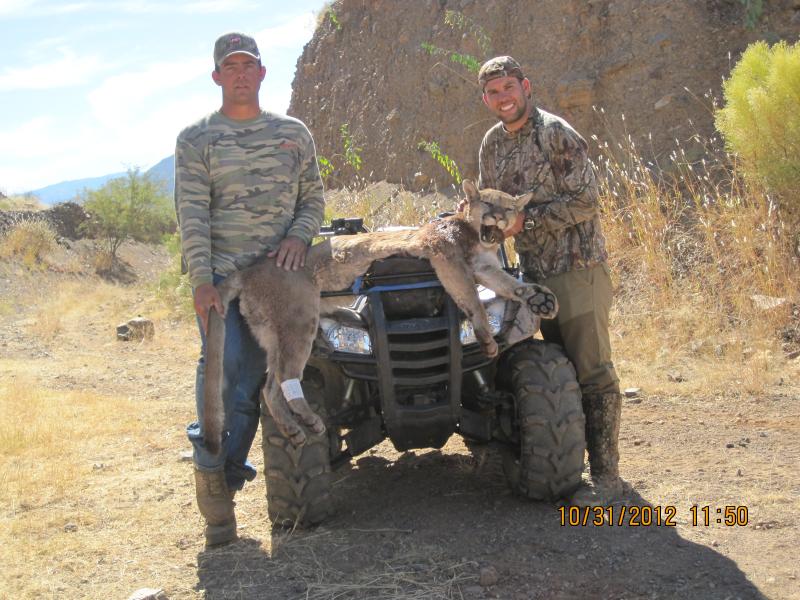 Wade had taken hunters for many years on a guided only basis.  Fitting in his passion along with a regular work schedule.  In 2012 we decided to make the leap of FAITH and start Killer Lion Hunts.  Our family got involved in making this ranch house a hunting lodge.  We have grown a lot over the past few years and have been blessed with so many great clients that turned this dream into a reality!  One of those first clients to come experience dry ground mountain lion hunting with Wade was Tommy Levy.  When we decided to add a blog to our website it made perfect sense to start with our first fully outfitted client.  Tommy came to hunt twice that year to harvest this great mature Tom.  Thank you Tommy for taking a chance with us!

“I hunted with Wade Eckel in February and October of 2012 for a Tom Mountain Lion.  I chose a dry ground hunt as opposed to snow and I’m glad I did (It was awesome).  I saw a bunch of Coues deer, a few Coatimundi, a bunch of Jackrabbits and Cottontails, some Javelina, a few Merriam turkeys, etc.  Wade is amazing at what he does; he has been hunting the southern Arizona mountains/ranches for a long time and knows all of the lion travel routes.  We covered a ton of land by truck, ATV, and foot.  His dogs are top-notch.  His lodge is awesome and in the middle of the desert.  His wife (Marlene) is the hostess/cook and you actually eat breakfast and dinner with his daughters.  I also met his Dad, who was a great guy.  It is a family run operations, and exactly what I was looking for when I traveled to Arizona from New York.

It all came together on Halloween morning.  We went out at 4am to look for tracks in the dark.  At 6 am we found fresh tracks of a Tom that Wade estimated to be 3-4 years old and 110-120 lbs.  We got the dogs and got back to the fresh track to start tracking at 7am.  We did about 3 miles on foot, up and down canyons.  This lion was obviously hunting deer as his routes were very erratic.  At around 9am we caught a glimpse of the lion running.  The dogs were in chase, and we moved as quickly as possible back down toward the ATV.  By 9:45 am we found fresh tracks a mere 20-30 yards from the ATV, so that meant that the lion ran right by.  The dogs were able to tree the lion soon after at 10:20 am.  After a few quick pictures and video I shot the lion out of a tree at 10:30 am.  I used Wade’s 44mag trapper.  Wade estimated this Tom at 3 1/2 years old and 110 pounds with an empty stomach.  I was ecstatic that I had gotten a great Tom mountain lion.

Since I still had some days remaining on my hunt Wade took me out varmint calling.  He didn’t expect much with the full moon but we gave it a shot.  We did 3 sets and I shot a big female gray fox on the 1st set and a big male gray fox on the 3rd set.  We were done in under an hour.

I flew home back to NY with a Lion and 2 foxes.  I had all 3 animals mounted life-sized by my taxidermist.  I have hunted many states/provinces throughout the U.S. and Canada for a variety of species, and this hunt goes down as one of my favorites!” – Tommy Levy